Rev. William Case (1780-1855) became involved in the War of 1812 by chance. Having served in Upper Canada and New York state since 1805, he was at this time the Presiding Elder of the Oneida District of the Genesee Conference. With the help of Joseph Kincaid, the preacher on the Black River circuit, and one other, he was preparing for a camp meeting. The booming of cannons drew him to the battleground-where Lydia Hayward’s husband Joshua, was one of the soldiers defending the harbour. 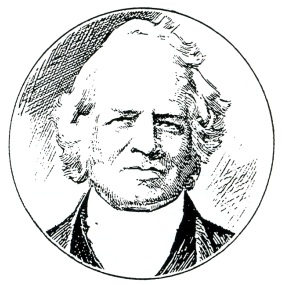 “I was present a few hours after the battle of Sackets Harbor, where I witnessed a scene of death and carnage more moving than ever I saw before. Numbers lay cold in death. Many were groaning with their wounds and bleeding in their gore. Myself and two preachers were in Rutland, about ten miles from the Harbor, and were about to commence clearing off a camp-ground, but on hearing the cannon and constant roll of small arms we gave up the idea of work and betook ourselves to prayer. Such my great surprise and mingled grief and joy, several brethren and acquaintances from Canada came and made themselves known to us; they were militia in arms, and were taken near Fort George. (Fort George at what is now Niagara-on-the-Lake.) Among these were Messrs. George Lawrence, leader at Four Mile Creek; William Clinton, from the head of the lake, and Russel Hawley, brother of David Hawley, of the Bay of Quinte. (Davis (not David) and Russell Hawley were the sons of Jeptha Hawley, U.E., of the village of Bath in Emestown Township.) Their captivity was an affliction which made friends more consoling.

“By them [the prisoners] I was informed that in consequence of the troubles there had been no preaching in that part [of Upper Canada] for some time; that Mr. [Henry] Ryan and others were travelling and doing all the good they could for God and souls, that none of our brethren had been killed. Brother Merwin has permission to preach to them [the prisoners at Greenbush] every week, and he has appointed to do so every Tuesday afternoon, if the weather will permit. They are a mixed multitude of English, French, &c., amounting to about five hundred and fifty nine, but very anxious for meetings. Brother Merwin is to send them Bibles from the Society in this place, and other books. O pray for them!” [J. Carroll, ibid., pages 320, 322.]

c) George Lawrence and How He Came to be Imprisoned.

(George Lawrence (1757-1848), was a native of the colony of Palatines settled near Limerick, Ireland. His family emigrated to Camden Valley, N.Y., in 1767. George fought with Butler’s Rangers during the Revolutionary War, then settled in the Niagara area. His older brother, John Lawrence, was a member of the first Methodist class begun by Barbara Heck in New York City in 1766. Later, John married Margaret Switzer, the widow of Philip Embury, and settled in Augusta township. John Carroll (1809-1884), from whose volume these passages are taken, gives these additional details about George Lawrence and the war, including some of his [Carroll’s] own childhood memories:)

“Mr. Case says the Canadian prisoners `were militia in arms,’ but Mr. Lawrence was an exception. The reader will remember that he was one of the Methodist Palatine stock, and brother of John Lawrence, the second husband of Mrs. Philip Embury. In the war-time he was so advanced in years as to be exempt from militia duty, although his sons bore arms, and one of them was wounded the day his father was taken prisoner. Mr. L., senior, kept about the peaceful avocations of his farm, and continued to meet his little [Methodist] class in his own house in those stormy times. He was made a prisoner at his own door at Cross-Roads. The writer [John Carroll], though only a child of four years, was there, and remembers well his arrest, as he does all events consecutively since the battle of Niagara. The Americans were then in the occupancy of Fort George, and a portion of the British army were entrenched at the Cross-Roads, about half a mile from Mr. Lawrence’s residence. A general skirmish had taken place all that morning between the pickets and advanced guards of the two armies. A body of only ten American Indians, or white men disguised like Indians, advanced towards Mr. L.’s, where an officer’s mess was kept and a guard of thirty soldiers posted. The cowardly officer of the guard, one McLeod, (let his name go down in posterity), threatened to “cut off the first man’s head who fired a shot;” and, to the everlasting disgrace of British soldiers, they took to their heels and fled to the camp, leaving the women and children to the mercy of the savages. These latter, when they came up, shot a corporal of the Glengarries, a Mr. Smith, who chanced to be there, and who boldly stood on his defence. Mr. L., thinking the matter some emeute [i.e. popular uprising] between the British soldiers and our own Indians, passed through the front gate into the road, and gave one of the savages his hand, who took and held it, while another came up with an angry countenance and grasped the old gentleman by the neck-cloth, and made him a prisoner. He and poor Smith, whom only the courage of a woman, Mrs. Cassady, kept the savages from killing outright in the house whither he had crawled, were led away from our sight. Smith died on the road.” [Towards the close of the war, when Lawrence was on his way back from captivity, Carroll added.] “We had the supreme felicity of extending the hospitalities of our humble house in York to Mr. Lawrence, whom we all revered and loved as a father. The writer met this saint of God `in age and feebleness extreme,’ and found him rejoicing in hopes of the everlasting rest.”

(Note: The obituary of George Lawrence (Christian Guardian, 23 August 1848, page 178) nMs that “he was savingly converted to God by the instrumentality of Methodism, ” several years after settling in Niagara. For forty years he held the office of a class¬leader. He was buried in the old Methodist cemetery at Virgil, which was formerly known as Lawrenceville, or Cross Roads, or Four Mile Creek, near Niagara-on-the-Lake.)