Click on the image to read the message from the Board of Trustees. 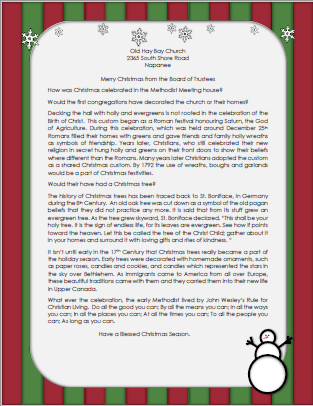 The Christmas season is upon us once again. It will be a different Christmas than many of us have imagined, but the spirit of Christmas will always be with us as we journey through the coming weeks.

It has also been a very different year for Old Hay Bay Church, and for all of the volunteer trustees and custodians who in previous years have given so much of their time and talents to its care.

In 1792 many people had a vision for the future and worked as a community to build this sacred place. If the walls could talk, they would tell us about the many milestones it has experienced: weddings, baptisms, singing and laughter and the tears of sudden deaths, rebellions, wars and plagues.

This summer the church had a “closed” sign on the front of the building. But that did not stop the visitors from stopping by and wandering around the grounds. Many peered into the windows and wondered what great stories they didn’t get to hear. Others stood at the shoreline and drank in the peacefulness the bay can offer, while others journeyed into the cemetery and read the names and dates of those honoured there.  Covid-19 could not stop the draw that many people have to the church and its surroundings.

Each year the church reaches deep into the hearts and souls of many. Some are connected by ancestors. Some are connected by love and passion and a sense of calm that the church will share with all. Although the annual pilgrimage service did not take place, clergy and non-clergy shared their gifts through words, music and songs. Virtual sermons and music videos were recorded at the church. This continued dedication helped many as we said our final good byes to two former trustees this year.

In the absence of custodians and regular visiting hours, progress continued on the general upkeep and the restoration of the church and grounds. Support continued to come in through new volunteers and financially.

In our hopes for the future the Board will continue to care for the church and its artifacts, the cottage and the cemetery.

This year and the coming Christmas season have reminded us of what is most important to ourselves and to our family and friends. When we think of the gifts we have been given and the gifts we wish to share we realize that the material items have a place, but not the most special place in our hearts. Although this may seem like a contradiction, we are asking that you think of Old Hay Bay Church as one of those special memories and honour that memory with a gift to the church. Maybe there is someone on your list that would appreciate a gift to the church in their name. Maybe, it is the gift you give yourself. A gift for the present and for the future. A commitment to another 228 years of a special place for generations to come.

All gifts over $20.00 will receive a tax receipt and can be allocated to the General or Restoration Fund.  We are on Canadahelps.org or donations can be mailed to our treasurer: Harvey Nikkel, 1400 Benn’s Point Road, Napanee, Ontario. K7R 3K7.

On behalf of the Board of Trustees we wish everyone a safe and blessed Christmas season.

When the Loyalist settlers of Hay Bay prepared to celebrate Christmas in 1791, they were looking forward to giving their community a wonderful Christian present in the new year. By the summer of 1792 they were holding Methodist services in a “meeting house” on the south shore of the bay. 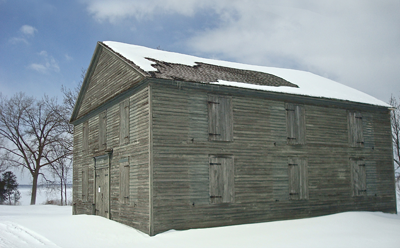 Next year the church will be 225 years old and is in need of extensive restoration. Externally the siding, shutters, window frames and some windows need replacement. A restoration committee has been struck to see this through and to conduct other improvements to the property. Further details will be forthcoming.

The building was expanded significantly in 1835. As the congregation continued to grow, it abandoned the building and sold it to a farmer for use as a granary and storage shed. That might have been the end of the story of the church but there was more.

The church was saved through the persistence of Methodists who thought its heritage should be preserved. The roots of Canadian Methodism were sunk deep in a building constructed by American refugees. Today it is the oldest surviving Methodist building in the country.

The building was re-purchased and rededicated in 1912. With church union in 1925 it became a property of the United Church of Canada. In 1957, the church was officially recognized as an Ontario Historic Site, and later in 1992 received the American Methodist designation. Likewise, the church, land, and its nearby cemetery were designated as a National Historic Site of Canada in 2001.

Although isolated and quiet in winter, the church is a lively place in summer. It is open to visitors every day from mid-May to mid-October, thanks to an enthusiastic group of custodial volunteers. A board of trustees, operating under the auspices of the Bay of Quinte Conference of the United Church, maintains and supervises the church. The history of the church and its original 22 “subscribers” (patrons) is celebrated on the fourth Sunday of August at the annual Pilgrimage Service.

If you have never been to Old Hay Bay Church, take time to visit and explore your Methodist roots. The church is south of Napanee, near Adolphustown. Even if you’ve been here before, come by again. There’s always something new.

For now, may God, who blessed those early settlers, bless you with a very Merry Christmas and peace in the coming year.

The Board of Trustees of Old Hay Bay Church

For further information on this historic church building, you can find us at oldhaybaychurch.ca or on Facebook.